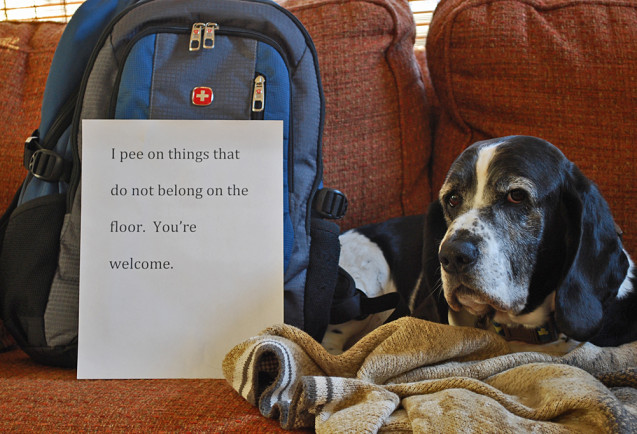 The Vine family found out the hard way that backpacks don’t go on the floor.

Denise doesn’t mind George’s antics though, they love him to bits! Here’s George’s story (and the amazing family who adopted him!)

We adopted him when he was about three-years-old.  He had been an outdoor dog in Northern Minnesota until his owner finally surrendered him to a shelter.  The vet found bb pellets in his liver on an x-ray, so he obviously did not have the greatest life.  He is a character!  We have had a lot of dogs as we adopted nothing but seniors for awhile, but none can quite compare to George.  He is a big baby, but is top dog.  He body slams 90 pound pitbulls at the dog park but will cry if anyone even barks at him.  At home, he wants to be held like a baby and pulls stubborn Basset things like walking to the door and then going completely limp refusing to go out.

12 Responses to “A Disgusting Reminder: pick up your things, kids!”