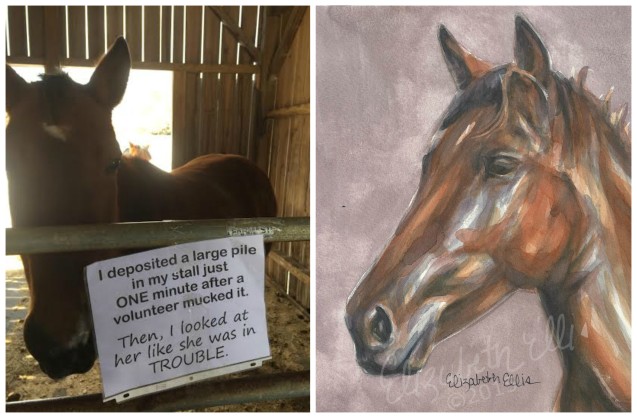 Apple is a 3 yo, 14.1 hand Mustang filly living in Northern Calvert County, MD. She was saved from a home with five other mustangs that were starving to death by Freedom Hill Horse Rescue. Her mother, Takoda, was nursing Apple and another foal while she herself was severely underweight. The other foal’s dam had died prior to the rescue arriving on the scene. Apple has been with us since she was a few months old. She is extremely playful, curious and confident. She has had over 30 days of professional training to get her started with basic ground work skills and the beginning stages of under saddle work and requires an experienced horse person who is familiar working with young horses to further her training.

Elizabeth Ellis, over at @LizzerTweets is an artist who is trying to promote awareness for rescues. She is currently working on a project where every week, for the entire year of 2015 she will be painting an adoptable animal currently in a shelter. She posts the painting, making a video about it on youtube, tweeting, etc every week. At the beginning of 2016, there will be an exhibition of all 52 paintings at an Ohio art gallery, after which the paintings will be mailed to either the shelter who still has the animal, or hopefully, the family who has adopted the animal. I’m calling it the year of 52 rescues. Go take a look at all the cool paintings she’s done so far! You can also find more artwork over at her blog!